Skip to content
HomeEulogy and Obituary for Arlene L. Jarvis

Most of us are not too good at remembering what happened on a particular date in history. We memorized “Columbus sailed the ocean blue in fourteen hundred and ninety two” but beyond that we’re usually a little baffled.  And so, this morning I’ve done a little research.  In 1919 Jack Dempsey won the world heavyweight boxing title, Albert Einstein was doing research at a university in Germany, Edsel Ford succeeded his father Henry as the President of Ford Motor Company, George Bernard Shaw’s new play premiered in New York City, Mahatma Gandhi led protests in India, Babe Ruth still played for the Boston Red Sox, WW1 officially ended with the signing of the Treaty of Versailles, and Arlene L. Wiandt was born in Zoar, Ohio on May 31st.

At first glance, it wouldn’t seem like any of those are a fair comparison.  How could a little girl from Zoar, Ohio possibly compare to so many well known people?  Honestly, it isn’t a fair comparison because, for most of us, Arlene wins that contest easily.  Few of us have seen Babe Ruth play ball, and as much as many of those famous people are well known, few of them had any immediate impact on our lives.  But Arlene Jarvis sure did.

Arlene grew up in Zoar, went to school in Bolivar, and, as the Second World War began she fell in love and got married.  If you think you know that part of the story, you’d probably be wrong because the man she married wasn’t Delmar.  We’re not sure who he was, but Arlene fell in love and married a man who shipped out for the war and she was widowed that same year.  This must have been a painful experience but Arlene never talked about it.  Her children didn’t find out that this even happened until a few years ago.  And then, as life went on, Arlene managed the London candy store at the corner of Perry Drive and Lincoln Way.  One day after work she went to the roller skating rink and met a guy named Delmar who was a regular competitor in the skating races there.  One thing led to another, and they were married in 1941.

Given her history, it must have been frightening for her when Delmar shipped out on the destroyer, the USS Kephardt, and served in both the Atlantic and the Pacific theaters, but she stayed faithful and waited for his return.  While she waited, Arlene worked at several different naval bases in Maryland but after Delmar came home, she didn’t work any more.  Instead, became a full-time mom and did everything for her kids including regular trips to Lake Cable to the swimming hole where she got some sun and socialized with the other moms as the kids splashed and swam.  But she also became Delmar’s constant companion.  They did everything together and they did everything they could to be with their family.

If their children or grandchildren were in it, Delmar and Arlene did whatever they could to be there.  Whether it was working at camp, or watching basketball, or the marching band, or something else, they were there.

If any of the family were in town, they did everything together whether it was going to the grocery story or anything else.  And with a son living in Wisconsin, they met halfway to visit one another each Easter and so, every year they would meet at a hotel in South Bend, Indiana.  Every year they would find places to go together, they would take walks on the Notre Dame University campus, and since the Amish restaurant that they liked was closed on Sunday, they would have Easter Sunday dinner together on Saturday evening.

Arlene Jarvis probably never met Babe Ruth, or Mahatma Gandhi, or Albert Einstein, but neither did any of us.  Honestly, even though those folks are famous, the things that they did didn’t change us that much.  But the things that Arlene Jarvis did changed the world for some of us.  Edsel Ford didn’t take us swimming or sing us to sleep when we didn’t feel well.  George Bernard Shaw wasn’t there to make a casserole or comfort friends at Trinity Church who had lost a loved one.  Arlene did all of those things, and more, for the people in this room.  For us, through her faithfulness, through her compassion, through her tenderness, and through her love, one life at a time, Arlene Jarvis changed the world.

There’s a lesson there for all of us.  Few, if any, of us will ever be so famous that our names are recognized all over the world for a hundred years.  But every one of us has the power to change our little corner of the world through faithfulness, compassion, tenderness, and love.

All it takes to change the world is for more of us to be like Arlene. 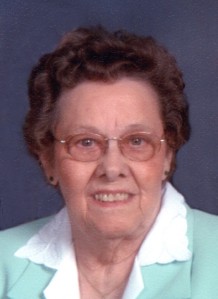 Arlene L. Jarvis, age 97; of Massillon, went home to be with the Lord on Monday, April 08, 2017. She was born to the late William and Pauline (Sylvan) Wiandt on May 31, 1919 in Zoar, OH. She married Delmar Jarvis on March 01, 1941 and they shared 75 years together until his passing in 2016.
Arlene was a devoted Wife, Mom, Grandmother, and Great-Grandmother. She managed a London Candy Store for 5 years.
She is survived by her sons Keith (Betty) Jarvis, Kenneth (Jeannine) Jarvis and Joel (Sandi) Jarvis; his grandchildren Keith (Cherie) Jarvis, Elizabeth (Jack) Jarvis-Whitehouse, Allison (Scott) Sigman, Amy (Jeff) Tillar, Ashley Jarvis, Matt (Kelly) Jarvis, Corey (Lindsay) Jarvis, Brandon Jarvis and; 11 great grandchildren a sister-in-law Wilma Mae Levengood, as well as a host of relatives and friends.
A Celebration of her life will be held at 11a.m. on Tuesday, April 18, 2017 at the Paquelet & Arnold-Lynch Funeral Home. Visitation from 10a.m. until the time of the service. Donations in Arlene’s memory can be made to Harbor Light Hospice. 25 S. Main Street, Suite 7, Munroe Falls, OH 44262.