Skip to content
HomeEulogy and Obituary for Arden E. Tuttle

I never had the chance to meet Arden Tuttle.

As I met with Arden’s family last week, I had never met any of them either.  And so, I asked them to tell me stories.  I asked a lot of questions because I wanted to know who she was beyond what we read in the obituary pages.  Not that her obituary is wrong, but only that, sort of by necessity, they tend to be a little dry two dimensional.  Instead, I wanted to know what it was like to know her, to be her friend, or her family, to live with her, or to live life alongside of her.

And what I found out was that anyone who wanted to be a part of Arden’s life had better be ready to run to keep up.  Sitting still, or at least sitting idle, didn’t suit her.  Arden was always busy doing something.

Arden Davis was born on the 4th of July in 1930, in Warren, Ohio and as far as I can tell, that’s about the only time that she wasn’t living life at a dead run, doing things for others, having adventures, trying new things, teaching others, and encouraging the rest of her friends and family to try to keep up.  In 1948, while attending Mount Union, she had 14 dates the first week, and Ward (Bud) was one of them.  But although she was the center of attention and had plenty of men competing for her attention, Bud was the one, and she took the bull by the horns and told him that she loved him.  Maybe it was because rather than trying to impress her, Bud had spent their time together teaching her how to play bridge.  Before long they were married, Bud was inducted into the Army during the Korean Conflict, and Arden was by his side as he went to training and then stationed in Indiana.  Throughout their adventures together, to Bud always referred to Arden as his “Little Rabbit” or just as “kiddo.”

As her family listed all the things that she had done, and all the clubs or organizations to which she had belonged, they started with the list in the obituary and just kept adding things to it as our conversation caused them to remember more.  Arden was active on lots of boards, she served in some capacity, wherever they lived, in every church to which they belonged.  Arden just couldn’t stay at home.  She didn’t much care for cooking or cleaning, or any kind of “domestic stuff,” but she did like gardening.  She also tried her hand at flower arranging and joined a group to learn how to do that, but her family doesn’t recall very many flowers ever making it home.

Arden was a life-long learner.  She loved education, travel, knowledge, and reading.  She never met a book she didn’t like, and books always seemed to find their way home with her.  They came home from the library book sale, and the book of the month club, and from her book club in town, and from anywhere else that she might meet one.  And she read them all.  She loved teaching.  And when she retired from teaching, she re-invented herself and learned how to be a financial planner and she was proud of that accomplishment, but she couldn’t really stop teaching.  She took the time, in her retirement, to go back to school and read to kindergarten kids.   But then she re-invented herself again some years later when she became the owner of her own travel agency.  And that’s just a start.  Did I mention that she also owned a pre-school?

Arden was always ready to try new things and go to new places.  Her passion for travelling took her to all 50 states and 103 countries (London was far and away her favorite. She visited there 15 times!) Bud was with her every step of the way and her children just grew up travelling.  When it was time for a vacation they were in the car by 6:00 am and on the road.  Later, she planned trips for senior citizens to Cleveland, and anywhere that she could find to learn and explore.

Arden was the tomboy, the redhead, she described herself as “short but feisty,” and she was fearless.  As a Girls Scout leader, she and her girls were out camping during the time when there were reports that Bigfoot had been seen in the area, possibly what is still referred to as the “Minerva Monster.  While they were in the woods, they cooked, camped, and hiked, and one night all the girls were in a panic because some of them thought they had seen Bigfoot near their camp.  And so, Arden, without hesitation, marches off into the woods to see Bigfoot for herself.  Arden had a reputation.  If you needed something done, she was the one who made things happen.

Arden always enjoyed playing games.  She loved bridge from the moment that Bud taught her to play, and she loved card games and board games of all sorts, but she did not like Monopoly and she was not a sports fan.

This was a woman who really liked people.  She could, and did, make friends while standing in line, and one reason was almost certainly because she was always genuinely interested in their lives.  But just the same, she was a woman who spoke her mind, and wasn’t afraid to be aggressive when she felt she needed to, or when someone was doing something that she didn’t like.  Her family and friends knew her to be a good listener, and a person with whom you could share your problems without being judged.  As a mother of four children, she had a relaxed parenting style that allowed her kids to explore their own interests but, at the same time, she advocated and pushed for them to develop intellectually.  As they became adults, Arden simply enjoyed being able to have adult conversations with her children.  As a grandparent, while she loved on her grandchildren, but she wasn’t afraid to be critical of how her children parented them.

So how should we remember Arden Tuttle?

I’m pretty sure that if she knew you were sitting around moping, or spending too much time mourning her, she would give you an earful.  Instead, I think the best way that you can remember her is to follow her example.  Remember that life is an adventure. Don’t just sit still.  Try new things.  Do what you love. Read, explore, see the world, expand your horizons, and have fun doing it.

Arden did all these things, and she would want you to get out of your chair, get out of the house, and do the same. 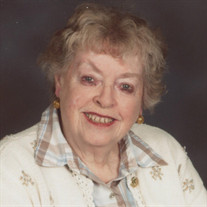 Arden was formerly an elementary school teacher in Alliance, Canton and Newark Public Schools. She was also formerly employed as an insurance sales person with Metropolitan Insurance sales, certified financial planner with I.D.S. American Express, and former owner of the Lake Cable Travel Agency, and an Avon Sales lady.

She loved being a parent, grandparent, and travelling, visiting six continents, 103 countries and all 50 states. She also enjoyed being a teacher, Girl Scout leader and bridge player.

Her other memberships included the Tennysonians, president of the YWCA, board member of the Alliance Women’s Club, music study club, founder of the House and Garden Club, Senior Center Chorus, Alliance Country Club and the Retired Teachers Association.

Services will be held at 11 a.m., Saturday, July 28, 2018, at Cassaday-Turkle-Christian Funeral Home with Rev. John Partridge officiating. Friends may call from 9 a.m. to 11 a.m., prior to the service. Interment will be at Fairmount Memorial Park.

Memorial Contributions may be made to the Greater Alliance Foundation 960 W. State St. Alliance, OH 44601.