Skip to content
HomeEulogy and Obituary for Wayne A. “Moose” Rinehart

3:1 There is a time for everything,
and a season for every activity under the heavens:

9 What do workers gain from their toil? 10 I have seen the burden God has laid on the human race. 11 He has made everything beautiful in its time. He has also set eternity in the human heart; yet no one can fathom what God has done from beginning to end. 12 I know that there is nothing better for people than to be happy and to do good while they live. 13 That each of them may eat and drink, and find satisfaction in all their toil—this is the gift of God. 14 I know that everything God does will endure forever; nothing can be added to it and nothing taken from it. God does it so that people will fear him.

15 Whatever is has already been, and what will be has been before; and God will call the past to account.

5:1 Now when Jesus saw the crowds, he went up on a mountainside and sat down. His disciples came to him, 2 and he began to teach them.

11 “Blessed are you when people insult you, persecute you and falsely say all kinds of evil against you because of me. 12 Rejoice and be glad, because great is your reward in heaven, for in the same way they persecuted the prophets who were before you.

I spent some time talking to Wayne’s friend, Maggie Bugara, yesterday to get a sense of who Wayne Rinehart was.  It didn’t take too long to understand that he was a nice guy and the sort of a man that people respected and liked to be around.  Wayne didn’t ever really have a use for the church so, as a pastor, many of the things that I usually say at funerals feels sort of awkward or out of place.  But as a veteran, I think I have a feeling for who Wayne was at a different level.

Wayne Rinehart, “Moose” to many of his friends, was a kind man.  He was a long-time member, and twice elected commander, of VFW Post 1036 here in Alliance.  He selflessly spent his time, his talent, and his treasure to work for, and to help fellow veterans.  In return, those veterans became friends and loved him back.  And in the last few years, after he had moved to the Danbury, he continued to make friends of both his fellow residents as well as the staff there.  Wayne was a kind, compassionate, and loving man.

But Wayne Rinehart was also a man who loved his family.  He never stopped loving his wife Marjorie, whom he married in 1959, and to whom he remained married for 49 years.  Even after he lost Marjorie in 2008, Wayne never stopped missing her.  Wayne also loved his brothers and sisters and their children, his daughter Sherri, and his granddaughter Ashlyn.

For years, one of his favorite things in the world was to go to fairs and horse shows, and watch Ashlyn show horses.  He was so very proud of her, and almost never stopped talking about his great love, and his pride in her.  Even after he and Sherri were estranged from one another, he never stopped caring, or loving, any of his family.   He missed them and wanted them to be a part of his life.  Even as he neared death, he would call out to them.  In fact, Wayne often wondered what he had done wrong and thought about how things could ever be made right between them again.  Many tears were shed with his friends as he thought about such things and their separation weighed heavily upon him.  In the end, his friends think that Wayne just gave up fighting, and it is entirely possible that Wayne simply died of a broken heart.

But through it all, it is clear that Wayne “Moose” Rinehart touched many lives, and many of you who are gathered here can testify to what he has meant to you in your life.

There’s an often repeated saying that is worth repeating again here:

Cry not because he’s gone.
Smile because he was here. 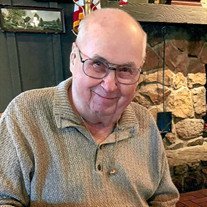 He was employed with Highway Asphalt: Division of Kenmore Construction until his retirement.

Wayne joined the International Union of Operating Engineers in 1955, the Masonic Lodge in 1964 and was a lifetime member of the VFW Post 1036, which he served as commander two times.

He enjoyed gambling and loved watching his granddaughter show her horses.
Survivors include his daughter, Sherri (Jim) Pinkerton; granddaughter, Ashlyn Pinkerton; and sister, Carol White, all of Alliance; and close friend and caregiver, Maggie Bugara, of Sebring.

In addition to his parents, Wayne was preceded in death by his wife, Marjorie (McCreery) Rinehart, whom he married July 4, 1959 and who died January 7, 2008; three brothers and a sister.

Services will be held 11 a.m., Wednesday, January 16, 2019 at Cassaday-Turkle-Christian Funeral Home with Pastor John Partridge officiating. Friends may call from 5 to 7 p.m., Tuesday, January 15, at the funeral home. Interment will be at Highland Memorial Park.
Arrangements are by Cassaday-Turkle-Christian Funeral Home 75 S. Union Ave., Alliance, OH 44601.