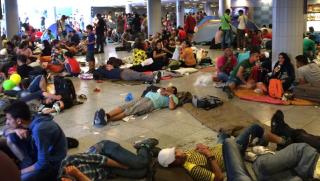 Today, Governor John Kasich added Ohio to the list of several other states that are refusing to accept even one refugee from the war torn areas of Syria and other nations.  This announcement is purely political and is entirely lacking in common sense and human compassion.
Judging by the Facebook posts I’ve been reading for two days, I’ve just offended many of my friends.
I don’t care.
Why? Because if you are a follower of Jesus Christ, you are completely ignoring nearly every instruction that Jesus ever gave.
Let me explain.
It is obviously apparent that terrorists have infiltrated the flood of refugees landing in Europe and elsewhere.  But while estimates of how many terrorists might be among them range from a few to as many as 15 percent, most estimates go no higher than 7 percent.  Still, considering that there are hundreds of thousands of refugees, 7 percent is a lot.  Allowing 10,000 refugees into the United States could mean admitting 700 terrorists.
That is unacceptable.
So why do I think that Governor Kasich and a whole host of other politicians have it wrong?
Because closing the doors on legal immigrants, even in the face of this enormous threat, conveniently ignores too much human pain and suffering.  Before I get around to Jesus, let’s first take a look at who these refugees are and why they are fleeing to other countries.
The civil war in Syria isn’t just about one group of radicals who are fighting against the government.  We think that way because we think of the Confederate States fighting against the Union, but that example is just wrong.  In Syria, there are literally dozens of armed factions that are warring, not only with Syria’s government, but against one another.  And so thinking that this is like the Rebs against the Yankees doesn’t really do it justice.  Instead, imagine that every church that you passed this week represented the headquarters of a different armed group.  Imagine that, in your community, the Baptists are fighting the Lutherans, the Catholics are killing Pentecostals, and the Republicans are at war with Democrats.  Not only is your neighborhood a war zone, every week or two, another group tries to capture it from the group that captured it the last time.  Some towns have been blown up and shot up multiple times, churches have been burned, women raped, and entire towns lined up in the streets and murdered.
This is daily life in much of Syria.
And so, not surprisingly, a lot of people, both Christian and Muslim, have left their homes, their families, and all that they own, to literally walk across several entire countries in hope of finding something better.
Are there “bad guys” mixed in with the “regular” refugees?  Yes.
But those of us who claim to follow Jesus are called to see the world in a different way.  Not through the lens of Democrat or Republican, but through the lens of the Gospel message of Jesus Christ.
If we look at what Jesus taught, we won’t find words like revenge, retaliation, or retribution.  We won’t find instructions to hate our neighbor or to fear the foreigners.  Instead, what we find are instructions to be merciful, compassionate, loving, and helpful.  Our mission is to rescue the lost, heal the sick, clothe the naked, and help others find hope and a future so that they too might hear the message of the Prince of Peace.
We have every right to be concerned about the possibility of allowing hundreds of jihadi terrorists into our country, but that fear cannot allow us to slam the door on the 93 percent who are only looking for a place to live that won’t get blown up next week.
It is convenient and easy for politicians to preach from a pulpit of fear and xenophobia.  But as Christians, we are not called to follow the teachings of John Kasich or any other politician.  We are called to follow the teachings of Jesus.
Jesus doesn’t expect us to be stupid or act foolishly.
We remember that Jesus teaches love, mercy, and compassion, but he also said,
“I am sending you out like sheep among wolves. Therefore be as shrewd as snakes and as innocent as doves.”(Matthew 10:16 NIV)
We are called to be merciful, but to be smart about how we do it.
Governor Kasich and other politicians are looking for easy, and popular, solutions but in doing so they sell Ohio, and the people of the United States short.
We are smarter than they give us credit for.
We are more than capable of sorting through the refugees and discerning which ones can be allowed in safely.
It won’t be easy.
But we can do it.
And it’s the right thing to do.

By now most of you have heard about the adoption ban put into law in Russia.  It all began with an attempt by our United States government to rein in human rights violations in Russia.  President Obama signed the Magnitsky Act, which provides sanctions against Russian citizens deemed by the US to have violated human rights.  Prior to this, the Russian government was concerned about the abuse some Russian children have received at the hands of their adoptive parents in the United States but had only recently, in November, 2012, signed a new treaty designed to provide greater access for Russian officials who desired to review the treatment of adopted children.  This new agreement was only in place for eight weeks before the adoption ban was signed by President Putin.

The Russian government claims that the adoption ban was necessary because they were not getting access to the documents that the new treaty was supposed to give them and the American government claims that the whole thing is just retaliation for passing the Magnitsky Act.  Whichever is true, it is neither the American nor the Russian government that is the big loser.  The big losers remain the children who will remain in Russian orphanages instead of in loving homes.
I know something about this.  Our family includes two children who were adopted from a Russian orphanage.  The trauma that they suffered in their first year of life has been a real education.  Before we witnessed it firsthand, I never would have believed that children could be so damaged in their first year of life.  We were always told that “Love heals all wounds,” and “Love conquers all,” and things like that.  We genuinely believed it when people told us that all we had to do was take them home and love them.  But sometimes love isn’t enough.  Thankfully, the problems that our children have, though not insignificant, are not nearly what other parents, whom we’ve met, live with every day.  Some of the neurological, emotional and psychological problems that grow out of living in an orphanage, even for a few months, are frightening.
While I could not ever condone abuse, I have seen enough to understand how parents of some of these children could reach a point where they simply don’t know what else to do.  Many parents do not abuse these damaged children but recognize that they cannot cope with the behaviors of their children and choose to dissolve or disrupt the adoption.  That means what it sounds like; they go in front of a judge and declare that they are no longer the parents.  This frees them, but makes the children orphans yet again and turns their care over to the state in which they live, or to yet another set of adoptive parent and cause still more emotional and psychological damage.
Children from former Eastern bloc countries (primarily Russia and Ukraine) bear a higher risk for behavioral problems and eventual adoption disruption.  We don’t completely know why, but although similar problems are seen in children from other nations, these children see higher rates of disruption than any others.  I cannot quote any particular sources but I have heard estimates as high as 10-20 percent.  That means that even with the resources of wealthier American parents, even with parents who love them, even with access to modern medical and psychological care, between one in ten and one in five of these kids have real, serious problems.   Do the Russians have a right to be concerned about what is happening to their children?  Certainly.  But what happens if they don’t come here, don’t have parents, and don’t have access to care?  Russia does not have a history of adoption.  Adoption is not a part of their culture.  While adoption does happen, fewer Russian children are adopted by Russians than by Americans, and we are just one country among many who has, until now, been able to adopt from Russia.  Children who remain in Russian orphanages are likely to stay there until they “age out,” until they are old enough that the Russian government turns them loose on the streets with no support whatsoever.  The majority of children who age out of Russian orphanages will end up dead or in prison within two years.
Yes, these children can be scarred and damaged by even a few months in an orphanage.  Yes, we should strive with all that is within us to do a better job than we are doing.  No.  No child should suffer abuse at the hands of their parents regardless of their behavior.  But the Russian government needs to look in the mirror as well.  Our system may not be perfect, but an adoption ban that prohibits these children from coming home to loving parents doesn’t fix the problem and in reality only makes it worse. 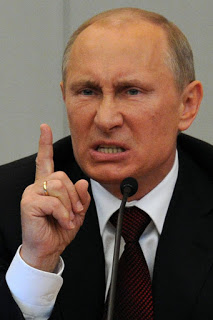 As usual, when grown-ups fight, the ones who lose… are the children.