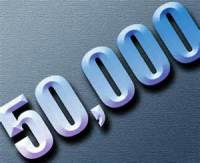 Last month, Scribd, the webpage where I post sermons online, indicated that I had surpassed 50,000 ‘reads’ on the 187 documents that I have posted.  One sermon a week, times about 50 weeks each year (I do take time off once in a while) and we can see that I have been posting there for a little less than four years.  In fact, as I dig back through the records, I find that the first file was uploaded in September 2009.  Since then, people from around the world have found their way, by a variety of means, often through Google or other search engines, to read the words that I have written.  And it was all an accident.

Ten years ago when I first began in ministry, I was more of an engineer than a pastor.  I knew that I could not simply open a Bible and preach without notes, or even preach from a stack of 3×5 cards.  If I was going to talk for 20 minutes and sound even remotely coherent, I knew that I would have to prepare better than that.  And so, each week, I would type my entire sermon, word for word, and then, on Sunday, deliver it from the pulpit.  I had enough experience in High School Theater and in other dramatic productions that I don’t think I ever just stood there and read to people in a monotone voice, although there have been a few folks who accused of something close to that.  I’m sure I could have done better with more training and experience, which is what happened (I hope) over my years as a student pastor, a seminary student and as a full-time pastor.
After some time had passed, someone suggested that since the sermon was already typed up, that we could make copies and provide them outside the sanctuary for those who had missed the previous week.  From there this thing grew.  People started asking for copies to take to our shut-ins, and then email copies to college students and others, and then, finally, a friend suggested that we might launch a discussion forum on Facebook for folks to ask questions.  When we launched the discussion forum (which never really caught on) we needed a place to post copies of the sermons online and so I searched the Internet for a service that was similar to YouTube, but for text instead of video.  That is how I found Scribd.com.
On Scribd, I discovered an online community of readers and writers.  There, people could subscribe to what I was writing, and I could subscribe to theirs.  I had intended to create a place for the people of our community to read and discuss the weekly message but, within weeks discovered that I had subscribers from China to Africa to Pakistan.  There were people who were reading the sermon of a little country church in Ohio because there was no local church near them that spoke English, or because the message of Jesus Christ was considered subversive in the places that they lived.  Now, nearly four years later, nearly 60 people read one of these messages every day.
I have no illusions that each of those 50,000 mouse-clicks means someone read all the way through something, but I continue to be amazed and humbled by what God is doing with the words that he has given to me.
I have never believed that people were reading these things because I was a great writer, nor do I think that Billy Graham or Bill Hybels have need to fear from my speaking ability.  Every time I look at these numbers I remember God’s words in Isaiah 55:10-11:
As the rain and the snow
come down from heaven,
and do not return to it
without watering the earth
and making it bud and flourish,
so that it yields seed for the sower and bread for the eater,
11 so is my word that goes out from my mouth:
It will not return to me empty,
but will accomplish what I desire
and achieve the purpose for which I sent it.
And Paul’s words in 2 Corinthians 12:9:
But he said to me, “My grace is sufficient for you, for my power is made perfect in weakness.” Therefore I will boast all the more gladly about my weaknesses, so that Christ’s power may rest on me.
God took my weaknesses and is using them to reveal his message to the world.
I am simply amazed and humbled at what he is doing.