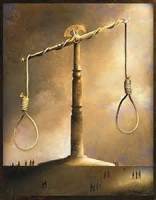 I used to support the death penalty.  After all, that’s what good Christians did, right?  Murderers received what they had measured out to others.  The death penalty was in the Bible and that was good enough for me.  But as the years went by, I began to wrestle with facts and ideas that didn’t fit.  It took time, years, even decades before I realized that I was changing my mind.  Even then, as a member in, and then as a pastor of, conservative congregations, I didn’t talk much about it.

I was troubled as I wondered how grace and mercy were served by the death penalty.  I was also troubled as I heard more about the costs of a death penalty conviction.  I suppose the last straw was when I first heard about the number of convictions being thrown out as DNA testing was first being used in the legal system.  Over the years, the evidence piled up until I had to surrender a notion that I once thought was reasonable.  I am not any different than I used to be.  My political and religious leanings are not significantly different than they ever were but I now believe that it is both logical and reasonable to oppose the death penalty from both a practical and a religious point of view.  Here’s why…
The Death Penalty is Not a Deterrent–Crime statistics in places where there is a death penalty are not statistically different from places where there is not.
Cost – It costs more to incarcerate a death row inmate.  Prisoners convicted under a death penalty statute are granted mandatory appeals and that process is expensive.  Estimates are that a death penalty inmate costs 2 to 5 times more over his or her lifetime than one who is incarcerated for life.
Fairness and Justice – The scriptural standard of evidence, particularly for murder, was from the beginning (Deuteronomy 17), two eyewitnesses.  In our modern world, having two witnesses is rare.  Mistaken identity is now one of the leading causes of error in our legal system.   Add a host of other errors, and suddenly a lot of people find themselves wrongly convicted.  For the last decade or so, an average of 18 death row residents per year were cleared by DNA evidence.  It’s so bad, that nationwide, a Columbia University study found serious errors in 68% of all death penalty cases and 2 out of 3 death penalty cases were overturned on appeal.  Of those overturned, 82% were retried on lesser charges.  Granted, no system is foolproof, but when ours is so messed up that we get it wrong 2 out of 3 times, its time to try something else.
Consistency – The church is usually among those who proclaim the sanctity of all life and declare to the world how God loves all people.  If we really believe that, then why is the life of a murderer not just as sacred?  Does God love murderers less?
Grace, Forgiveness and Redemption – If we believe (and I do) that the Gospel message is all about grace, forgiveness and redemption, how do we justify the state sponsored killing of incarcerated criminals?  Where’s the grace and forgiveness in that?  How can God do a work of redemption in someone’s life when they’re already dead?  If we believe that God can change the hearts of human beings, then why are we so quick to assume that these men and women are unredeemable?
As I wrestled with these questions, I realized that I didn’t have any answers that could make my continued support of the death penalty make any logical or spiritual sense.  That doesn’t mean that there isn’t a part of me that thinks the perpetrators of particularly horrible crimes shouldn’t die in some particularly painful way.
What it means, I think, is that I’m beginning to understand the difference between retribution and justice.