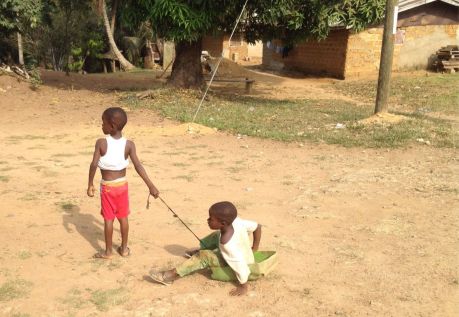 As you probably know by now, Patti and I have returned from our mission trip to Liberia, Africa with the Farmer to Farmer mission team.  This was my first trip to Africa, and Patti’s second, having been to Kenya fifteen years ago.  But while both of us have considerable travel experience, there was a lot for us to learn and digest.  In the days and months ahead we will be sharing our stories in church and putting our photographs into some sort of presentation as we attempt to tell the story of what we did, what Farmer to Farmer is attempting to accomplish, and why we want to invite our friends to go with us on a future trip.

For now however, I just want to give you a really short outline of what we did.

Our trip to Harrisburg began with a trip to the airport in Cleveland on January 10th, where our team divided into two groups.  For reasons that I still don’t completely understand, the folks making our reservations found that the cheapest rates could only be purchased for groups of no more than four people.  So, although all of us met in Cleveland, three of us were heading toward Brussels, Belgium through Washington, DC, and four through Toronto, Canada.  Patti, Pryde Bass, and I left for Washington first and the others were supposed to leave five minutes before us.  But as we arrived in Washington (and cell service), we discovered that they had been delayed by poor weather in Toronto and would miss their connection to Brussels.  Even worse, once we arrived in Brussels (and a good internet connection) we found that they would arrive in Liberia almost a day and a half behind us.

Our flight to Brussels was uneventful and after several hours we boarded our flight to Monrovia, Liberia with a stop in Freetown, Sierra Leone.  The pilot announced that they hoped to make the stop in Freetown as short as possible but we soon discovered that wasn’t going to happen.  Apparently, the ticketing agents in Freetown forgot that although many people had deplaned, some of us were staying onboard for the trip to Monrovia.  As a result, they issued more tickets than there were seats.  What resulted was a really jam packed airplane, overstuffed luggage compartments, and I’m sure that I saw one or two passengers sitting in the jump seats that are reserved for the crew.

We arrived in Monrovia around 9:30 pm (January 11th), were picked up and swept through the VIP line and out to a waiting car (with air conditioning) while our hosts made sure that our passports were properly processed and collected our baggage.  The drive to Harrisburg took two hours and after traveling for a day and a half, I didn’t do well sitting in the back seat.  After about an hour and a half I had to ask the driver to pull over (in the middle of nowhere) so I could… um… get some air.

Eventually our team was reunited and we got to work.  While we were there we worked on improvements to the Farmer to Farmer guest house in Harrisburg to make future mission teams a little more comfortable, but we also did a great many things to help Saint John’s United Methodist Church and the people of Harrisburg.  Some of our group took steps to get a deed to the property on which we hope to build a new high school.  This is a big deal because this type of document can only be processed by the federal government and there are a great many steps (and necessary signatures) that are required.  Other members got the ball rolling with a United Methodist team (a part of the Liberian Annual Conference) that digs wells to restore a well at Saint John’s UM church, but also to repair three non-functioning wells in town for the people of Harrisburg, and to dig one more in the village of Painesville near Monrovia.  We also built room dividers, blackboards, bookshelves, and study tables for the public school, donated school supplies to Saint John’s preschool, to the Lutheran elementary school, and to the government (public) school, and donated medicine and supplies to the community health clinic.  There’s more to our story but these are the highlights.

Our return trip took about from Harrisburg, to Monrovia, to Brussels, to Toronto, to Cleveland, and then home.  Altogether to took about 36 hours, with around half of that flying and half just sitting in airports waiting.

In the end, although it sounds a little strange, what’s even greater than the things that we did was simply our presence there.  To a people who live far from the big city, in a country ruined by decades of civil war, to people who have less than most of us can even imagine, just being there is a reminder that they have not been forgotten, that people care, that the church cares, and that their lives matter to someone.  I had been told about this before we left and again after we arrived, but as we met people and made friends there, it was easy to see in their faces, and by their actions, that this was absolutely true.  Seeing that we were there, and just knowing that we cared enough to offer a little help, was enough to give people hope.

Stay tuned.  We’ll be sharing more about our trip in the days ahead.

Meanwhile, please pray and ask God if he is calling you to join us on our next trip (in a year or two).