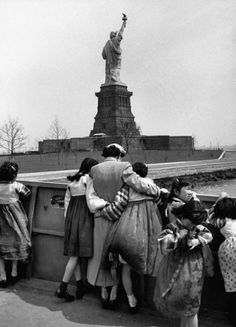 What should we do with immigrants?

What is the right thing to do?

Does the Bible offer any help or insight into this problem at all?

With all the press and politics surrounding the issue of immigration, regardless of our personal feelings, we often wonder what the Bible can tell us about how the church ought to approach the subject.  We might also simply wonder if the Bible has anything to say about immigration at all.

The position of the Bible is clear and consistent through both the Old and New Testaments.

Its teaching begins early.  In Deuteronomy 26:4-6, Abraham is described as a “Wandering Aramean” and the people of Israel were commanded to remember it whenever they brought a sacrifice to the Tabernacle.

4 The priest shall take the basket from your hands and set it down in front of the altar of the Lord your God. 5 Then you shall declare before the Lord your God: “My father was a wandering Aramean, and he went down into Egypt with a few people and lived there and became a great nation, powerful and numerous. 6 But the Egyptians mistreated us and made us suffer, subjecting us to harsh labor.

God’s instruction to his people included this instruction so that even generations later, long after they had settled and built houses and cities in the Promised Land, they would remember who they used to be.  God built this into their regular system of worship so that his people would remember that their forefather was an immigrant and they themselves used to be a nation of immigrants, nomads, and wanderers.

Thousands of years later, the writer of Hebrews echoes that same message saying, “12 And so from this one man, and he as good as dead, came descendants as numerous as the stars in the sky and as countless as the sand on the seashore.

13 All these people were still living by faith when they died. They did not receive the things promised; they only saw them and welcomed them from a distance, admitting that they were foreigners and strangers on earth. 14 People who say such things show that they are looking for a country of their own. (Hebrews 11:12-14)

This reminds the people of God that all of us are only passing through this life and that we are fellow travelers as we pass between life and death.   This entire existence is only a temporary stopping point on grand journey through eternity.  Throughout scripture, we are reminded that in God’s eyes we are all foreigners and strangers.

In Hebrews 13:2, the instruction is even more specific saying, “Do not forget to show hospitality to strangers, for by so doing some people have shown hospitality to angels without knowing it.”

But in Ephesians 2:18-20, Paul challenges us in another way with these words:

18 For through him we both have access to the Father by one Spirit.

19 Consequently, you are no longer foreigners and strangers, but fellow citizens with God’s people and also members of his household, 20 built on the foundation of the apostles and prophets, with Christ Jesus himself as the chief cornerstone.

Here, Paul says that not only were all of us foreigners and strangers in the eyes of God, the thing that made us belong to each other wasn’t ever our citizenship in any particular nation.  Instead, what makes us citizens, what makes us belong, what gives us a home, regardless of where we were born, what language we speak, or where we live, is our faith in Jesus Christ.

When we grapple with scripture, we begin to understand the larger picture regarding immigration.  Certainly, there is room for differing opinions about the policies of the United States, or the State of Ohio.  But we realize that no matter what policies we support, those policies absolutely must include treating foreigners and strangers the way that we would hope to be treated if our positions were reversed.  We are called to remember that our forebearers, and all of us, were once wanderers, strangers, and foreigners.  As so, as we meet the people who carry those labels today, we are called, by God, to treat them with humility, hospitality, compassion, forgiveness, mercy, and love.