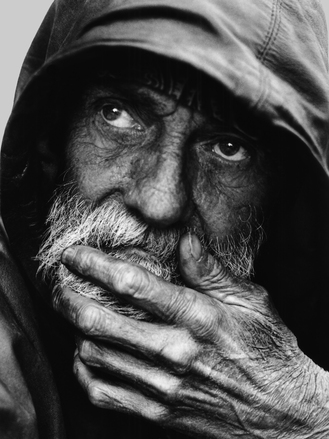 In one of the hobby forums that I visit, a member recently asked this question: Are homeless people scam artists, or do they really need help?  He went on to say that he was completely against giving handouts to people at freeway ramps because he felt that these people were “either dope addicts or scam artists who actually make a living doing this and put on a facade and play on people’s emotions.”  He felt that homeless people were in that situation because of the choices that they made, and because they were too lazy to get off their butts and get a job.

While I am not an expert on homelessness, I have learned a lot in the last few years and have met a few of them as they came to the doors of our church looking for help.  So, what follows is a part of what I posted in reply.

For what it’s worth, I come into contact with homeless people on a fairly regular basis and I have friends who minister to that population of people pretty much daily. The answer to your question “Are they scam artists or really need help?” is “Yes.” There are some, for the most part a pretty small minority who are “gaming the system” but the majority really do need help. Quite a few “move through” homelessness and move on to a more stable life but many are trapped there for a variety of reasons. A frightening percentage is there because of mental illness of one sort or another, and they are very hard to help. Almost all types of residential treatment facilities have been closed so there simply is no “place” where they can receive the kind of care that they really need. Despite their illnesses, most of them are fiercely independent and don’t want to move in with their adult children, relatives, or accept long-term charity. While some of us struggle to see the difference between begging and accepting the charity of their own family, for them the differences are important.

It’s also important to remember that something like 2 out of 3 households in the United States are only two paychecks from homelessness so it doesn’t always take a lot the completely shift someone’s life onto an entirely different track. I’ve met folks who suddenly became homeless because of domestic abuse, house fires, divorce, death of a spouse or significant other, and abandonment. In many of these cases, they found themselves with no belongings, no identification, no money, no transportation, no vital medications, nothing. Some of them are eligible for VA benefits or welfare but in order to collect those benefits you have to have a permanent mailing address, which is the one thing that homeless people obviously *don’t* have.

It really is heartbreaking.

Many are disabled, but a great many of them work, often as day laborers, some at regular jobs, even in semi-skilled fields like concrete and various construction trades. Many are single, but there are also a whole lot of families with school age children.

It costs $45 per day for a cheap motel because you don’t have enough money to pay for a month, or even a week at a time.

You work, but only make minimum wage (at best) so after taxes you get about $60 per day.

You can get some benefits if you can prove your identity, but through one circumstance or another (again, house fire, etc.) you don’t have any.

You can go to the courthouse, get a copy of your birth certificate, and use that to get a new driver’s license.

But the courthouse wants $65 to make you a copy and the BMV wants another $50.

Add to that the cost of the bus to courthouse, and basically losing a day’s wages while you wait in line.

So, do you get your ID, sleep under the stars or under a bridge, skip eating for two days, and risk losing your job, or do you go to work and spend all your money on food and a place to sleep?

These are the choices that many homeless people have to make every day. I’ve met them, sat with them, and shared stories with them over coffee.

To prevent abuse, and those who are really good at “gaming the system,” our church limits how much aid we can give one person and so our guidelines allow me to offer them a meal at a local restaurant, or a tank of gas, or a box of food (enough for a week or two), or one night’s lodging. I’ve had many people tell me to my face, “I’ll take the room for the night. I can stand being hungry, but I really need a place to sleep tonight.”

I’ve also met people who needed a place to stay even though they told me that they had family (even parents) who lived in the same neighborhood as the motel where we put them up. I can only imagine what sort of emotional, drug, alcohol, or psychological problems led to them not being welcome in their own parent’s home but it happens more often than you think.

So are there scammers? Sure.

Are most of them scammers? No, I don’t think so.

Do they really need help? Yes.

But what they really need is for all of us to be more vocal to our elected representatives at all levels to create systems that don’t trap people at the bottom, systems that make access to aid programs, many of which the homeless qualify for, easier, and to make access to basic identifying documents (like birth certificates) more affordable and accessible to people who are literally choosing between getting an ID and eating.

By all means, if you are unsure, then don’t give money to panhandlers. The people next to the freeway are often, but not always, the people gaming the system. Unless you work with them, it’s hard to know who’s who. But there is a significant population of people who really need help.

If you want to be a part of the solution, I encourage you to volunteer at a food pantry, or a clothes closet, or any one of many church and civic organizations that work with the needy and the homeless.  If you make it a regular thing (and not just show up once) you will begin to build relationships with them. It takes time. They’ve been burnt by the government, by charities, and lots of people who want to use them for their own purposes. They’ve been taken advantage of so many times that they are slow to trust, but if you take the time to really get to know them, and they learn that you are there because you really care about them, they might just share their story with you.

And it’ll probably break your heart.