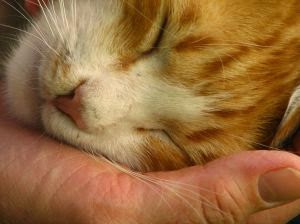 Have you ever had one of those “Duh!” moments when things start to make sense for the first time? But there are also moments when we read scripture and we completely miss important things because we assume that the people in the Bible were just like us.  In our scripture lesson this week, we read the story of Moses leading the people of Israel through the dry path God had created in the depths of the Red Sea.  But after the chariots, horsemen and soldiers of Egypt’s army are drowned, we read these verses in Exodus 14:30-31:
That day the Lord saved Israel from the hands of the Egyptians, and Israel saw the Egyptians lying dead on the shore.  And when the Israelites saw the mighty hand of the Lord displayed against the Egyptians, the people feared the Lord and put their trust in him and in Moses his servant.
Most of us read this and think, “So what? They trusted God. God is trustworthy. Duh.”  And, because we assume that the people of Israel were just like us, we completely miss what a big deal this really was.
We have lived our lives in possession of the entire Old Testament as well as the New Testament.  For many of us, there has never really been much doubt that God was trustworthy, even when we weren’t sure that God was real.  But the people of the Exodus did not know what we know.  The world that they lived in, and the gods that they knew, were very different.
In the story of the Exodus, despite coming from the family of Abraham, Isaac, and Jacob, the Israelites had lived in the land of Egypt for 400 years.  At that time, they did not have a formal system of worship, or priesthood, they had stories.  The stories of their forefathers had been passed down to them from generation to generation, and even though the stories were magnificent, they lived in a world with very different stories.
The Egyptians, like the Romans and the Greeks of the New Testament, were polytheists.  They believed, not in the one God of Israel, but in a collection of gods that were far from trustworthy.  The gods warred with one another through human agents and tens of thousands died for their amusement.  The gods of the Egyptians were capricious; they did what they wanted, when they wanted, often without any guiding morality.  To the gods, humans were little more than playthings and to humans, the gods were to be feared and not trusted.
And so when the people of Israel saw that the God of Abraham had used his great power, not only to provide a means for them to escape their slavery, but to destroy those who sought to kill them, they saw, many for the first time, that their God was different.  Finally, the stories began to make sense.  They realized that the God of Abraham, Isaac, Jacob and Joseph was different than the gods of the Egyptians.
They realized that the God of Israel could be trusted.
And trust really is a big deal.

To have Crossfusion delivered directly to your email, click here.