Skip to content
HomeTen (or more) Lessons from Ferguson 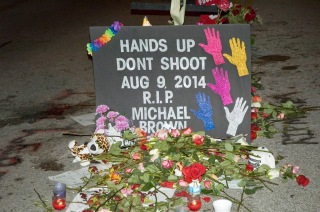 Recently I read an article by Jeremy Smith, in United Methodist Insight, in which he wondered why more  clergy did not speak out on the events of Ferguson, Missouri.  In the article, Smith insists that when we don’t speak out about injustice, we make it seem that we aren’t responsible for things that happen far away from us.  In his words, “When I don’t speak up, I help turn the response into a pocket and not a whole garment of the human experience crying out for justice. “  He’s right of course, but I have a hard time speaking out about events like those in Ferguson because I am so personally ignorant, confused and conflicted by them.
I’m a white guy and I grew up with the privileges that come with that.  Our family was far from wealthy, but I haven’t suffered from the subtle or overt discrimination that my non-white friends did.  I have not been pulled over by the police for “Driving While Black.”  I have no idea what that must be like.
I know that because I am white I do not fully appreciate all of the issues in play in the mess that is Ferguson, MO nor do I feel the impact of those events personally, as people of color undoubtedly do.  I know that anything I say about these events will lack understanding.   But Jeremy Smith is right, keeping silent allows injustice to continue and so I feel like I have to say something.
As followers of Jesus Christ we are called to stand against injustice, and there has been plenty on every side.  Not long ago, a colleague of mine posted a link to an article (to which I will not provide a link) that was so filled with hatred of hate and racism that it became hateful and racist itself.  In opposing racism, it named anyone who disagreed, for any reason, or for any principle, as a racist.  That sort of language is unhelpful and it doesn’t help any of us to think clearly.

So here are ten lessons that we can learn from the mess that is sorting itself out (and will be for years) in Ferguson, MO:

1)      There is never an excuse to hate someone whose skin is a different color, simply because their skin is different color.  It isn’t okay to hate someone because they are black but neither is it okay to hate someone because they are not.
2)      In a town that has a population with a majority of African Americans, it is inconceivable that the police department can’t find African American recruits or that the imbalance should be so substantial.  As I understand it, the federal government is investigating this disparity, and they should.
3)      When there is injustice it should be okay to protest that injustice. Peacefully.
4)       Protests about injustice should not devolve into riots in which property is destroyed and innocents are put in the hospital, and worse.
5)      It’s not okay to use injustice as an excuse to cause injustice.
6)      It’s not okay to hurt someone who is on your side, just because they are the wrong color.
7)      It’s not okay (nor is it helpful) to destroy the businesses that have supported an abused community to make the point that the community has been abused.
8)      To say that it’s NOT okay doesn’t go far enough, it is flat out wrong, offensive, and even criminal, for the police department to try to disperse a riot by showing up dressed and equipped for a war.  Uniforms and weapons of war have no place on our streets.  I have no idea why anyone thought that showing up with M-16’s and armored personnel carriers was going to bring peace.
9)      While it is important, even necessary, for the media to have access to the story and for the story to get a wide distribution, there is a point at which the media becomesthe story.  From several stories that I read, from several very different media outlets, a point was reached when most citizens had gone home and rioters appeared, many from out of town, simply because the media was there.  I don’t know how we could, and we probably can’t and shouldn’t place restrictions on media access, but when the media’s presence makes the violence worse, something needs to be done.  Perhaps the media outlets themselves can agree on some sort of code of conduct, or organize a media pool as is often done in wartime, to share stories and prevent an area from being mobbed by reporters.
10)   As to who is guilty in the original event that triggered this mess, I have to admit that the conflicting reports in the media make me unsure.  A young man is dead and shouldn’t be.  I don’t know who is at fault, but I am sure that a careful investigation is needed.  I am also sure that the Ferguson Police are not the ones who should do the investigating.  In Ohio, it is standard procedure for accusations against social workers to be investigated by a neighboring (outside) social service agency.  Perhaps police departments ought to do the same with any officer involved shooting.
Ultimately, there is plenty of fault to go around.  Ferguson may not be a “Perfect Storm” where everything went wrong, but a whole lot still went wrong.  The police got it wrong, the protestors got it wrong, the media got it wrong, and probably a few others as well.  But in every case, we, the people of God, the church, need to find a way to fight against injustice.
All injustice.
We need to speak up against institutional racism.  We need to speak out against a police force that is preparing and equipping to fight a war against its own citizens.  We need to speak out against rioters who overshadow legitimate protestors and also against a media machine that makes problems worse instead of better.
As followers of Jesus Christ, we are called to be salt and light to the world.  We are called to stand against injustice.  We are supposed to be doing all we can to make things better.
The events of Ferguson, MO make it clear that no matter where we live, regardless of our race, we have a LOT of work to do.

To have Crossfusion delivered directly to your email, click here.