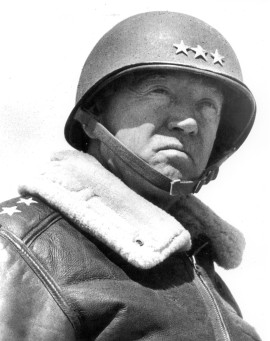 General George Patton demanded much from those under his command, but he never asked them to do anything that he wasn’t willing to do himself.  During the heat of battle, General Patton demanded that his troops only sleep once every two or three days, but he did that himself.  Being his driver was known to be a dangerous assignment, because George Patton was often so close to the battle that he got shot at and lost at least one Jeep to shell fire.  General George Patton led from the front and intended for his officers and men to follow his example.

This is also a repeated theme in the writings of the Apostle Paul.  Paul often says things like “Follow my example, as I follow the example of Christ.” (1 Corinthians 11:1), and “Join together in following my example, brothers and sisters, and just as you have us as a model, keep your eyes on those who live as we do.” (Philippians 3:17).  But Paul also expected the members of the church to live their lives the same way saying, “And so you became a model to all the believers in Macedonia and Achaia.” (1 Thessalonians 1:7)  Our calling is not only to hear about Jesus, and read about Jesus, but, as much as possible, to live like Jesus so that others can learn from our example.

While this applies to every believer, I believe that it is especially true for those in leadership.  Just as it was in the time of the Apostles, people today still look to their leaders to model what it means to be a follower.  This is why many people are so disappointed when our heroes fall, or when our elected representatives and other government officials act in ways that we think are inappropriate.  As a pastor, I find this to be especially challenging.

While I try to be a good example of how to lead a Christian life, I know that I often fall short.  But, at the same time, because I know that others are watching, I often try to lead from the front.  While I can’t come to every event, I try to pass out food at Perry Helping Perry, bag potatoes with the Society of St. Andrew, help where I can with the Homeless Outreach Team (H.O.T.) and participate in other ministries of the church.  This is also why I go on mission trips to Kentucky and Liberia.  I realize that some of the things that I am doing may be new to you.  But I hope that when you see me doing something new, you might ask yourself if maybe God might be calling you to do something new as well.

I’m obviously not perfect, but I am trying to follow the example of Jesus Christ, and I hope you are too.  But as we follow Jesus together, please remember that just as the believers in Macedonia and Achaia were watching the example of the Thessalonians, your friends, family, and coworkers are watching your example too.  Your life may be the only Jesus that they ever see.

Will you be leading from the front?